Rouen – the jewel of Normandy

After our days passed in Dieppe our trip let us to Trouville. During our drive to get there  we stopped in Rouen. From a number of guides, we read before our trip, we knew that this city is worth the visit. But what we did see during our walk around the old town did exceed our expectations by far. The city has a lot of flair and is at the same time very relaxed.

Rouen sits on the boards of the river Seine pretty much in the middle between Paris and Le Havre. The city has approx. 110,000 inhabitants and is the center of the region. It was first founded around 50 B.C., even though archeologists did find proof that there were peolple living here much earlier. At times it was run by the Vikings, the French, and the English too. In WW II the old town was almost completely destroyed but has been rebuilt very close to its origins. So you can see a lot of timbered houses here. 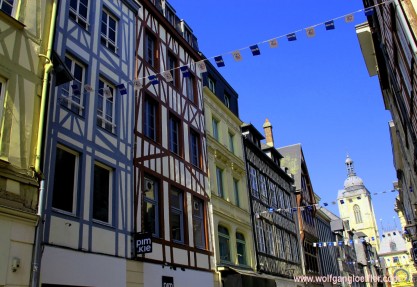 Upon our arrival from Dieppe we first look for a parking space. Since we are not familiar with the city we look for a parking structure that is close to the old town. On the Quai de la Bourse we find one pretty fast. Once again it is a pretty summer day and the sun sends its rays from a deep blue sky. After having the car parked we start our visit without much of a plan. We don’t want just tick off the sights but are looking forward to a nice stroll.

Soon we reach the Rue du Gros Horloge and can see to our left one of the best known sights of the city: the great clock tower. This street is also the main shopping street and so there are quite a few people around. But first we take a right and walk to the Cathedral. Despite the masses of people we do feel very comfortly right away. All those well maintained timber houses emanate a lot of charme. 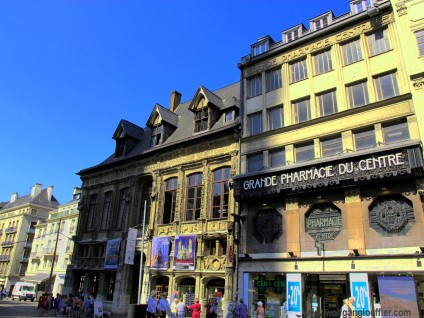 The cathedral counts amongst the most important gothic churches in France.  Unfortunately part of the facade was scaffolded when we finally did reach it. So we were not able to see this monumental building in all its splendor. In front of the church there is a large open space with a modern building right next it. This concrete building doesn’t want to fit not into the rest of the old buildings around it. But such construction sins are to be found a bit everywhere in the world.

The organ has been built by the famous organ builder Joesph Pilon and is under protection since 1862. In 1995 it was newly intoned for the last time. After a quick walk through we continue direction Rue de la République and admire on our way this beautfully designed staircase on the outside of the church. In one of our guidebooks we did see this great picture of a place in the old town and this is where we are headed now.

Again and again we stroll through narrow alleys that are lined with those colorful timber houses. after we have left the Rue du Gros Horloge it’s getting calmer real quick and there aren’t that many people around anymore. This way our stroll becomes even more pleasant. Every few steps there is a bakery with delicious food in their windows. I could stop at every single one and buy some of those delicacies. For me those bakerys are so typical french and amongst the best things this country has to offer. Too bad that this doesn’t exist at home.

On the corner of Rue Saint Armand and the Rue de la Chaîne we come across a small square. And there it is: The motive from our guidebook we were looking for. The colorful facades are shining in the bright sunlight and there are two trees in front of them. A picture perfect sight. The perfect Instagram shot.

We like this city ever more. It is really beautiful here. No wonder that the painter Monet did like it so much here. He did paint especially the cathedral pretty often. After we have admired the square for a while we continue to te next cultural sight, the Abbatiale Saint-Ouen. This is another gothic church with a former monastery. 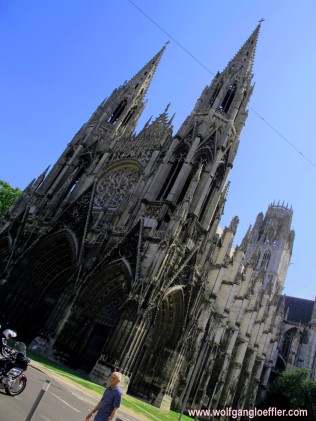 The church is really impressive. I admire those filigrane works again and again. Especially when you think with what simple tools they have made them. All hand made. But not only the outside is impressive. Inside the church there is a organ from Cavaillé-Col that counts amongst the most important in the world. St. Ouen has also the biggest collection of glass windows from the 14th century in France. Since they brought the windows already in 1939 to a safe place only two of the windows date from a later time.

Right next to this abbey stands another monumental building. The town hall of Rouen shows clearly how rich this city once has been. To see a town hall bordering an abbey is a first time for me. Never seen that before. And behind those buildings they share a beautiful park as well.

We continue since we want to see another important square of the city.

We keep strolling through the alleys of the old town. Those wonderful timber houses everywhere. That is a great and coherent picture. Walking along the Rue Saint-Lô we finally reach the square we wanted to see. The Place du Vieux Marché ist still being used as marketplace. Unfortunately they blighted this huge place with an ugly multi-strorey car park and a just as hideous church. The later is a monument in memory of Jeanne d’Arc. It was built in 1979 in form of a ship and the windows actually are original renaissance windows. That doesn’t make it much better.

Too bad. This square could be a treasure of this beautiful town. In the middle of the sqaure is a small garden with a sign. That is actually the location where on may 30th 1431 Jeanne d’Arc was burned to death on the stake. She had helped the later King Charles VII. to fight the Englisch in Orléans. A short time later she fell in the hands of the duke of Luxemburg who handed her over to the English. So she became a national hero and in 1909 the pope declared here to be a saint.

Meanwhile it is noon and rather hot. And we are hungry. So we start looking for a place in the shade to eat a snack. This is not that easy to be found. Most of the tables of the restaurants surrounding the square sit in the bright, hot sun. Finally we find a table at JM’S Café, a charming place offering shade. They don’t really offer French Cuisine. But the Burger we are having is really good. 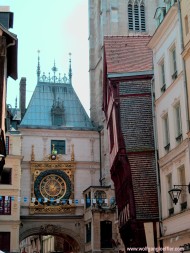 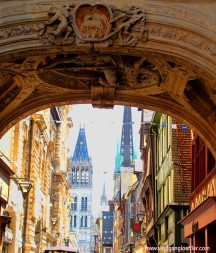 After lunch we start walking back to our car. This is how we end up in front of the Gros Horloge. This astronomical clock did show from 1389 till 1928 the exact time without interruption. Despite the time it also showed the weekday and the phase of the moon. After a restauration in 2006 it at least shows its old splendor. In the clock tower there is a museum and from its top you enjoy a great view over the city all the way to the cathedral.

There would still be a lot more to see in this city but we have to get going. This evening we have a reservation in a hotel in Trouville and want to stop for another stroll in Le Havre. We certainly will be back for a closer look at this marvelous city. 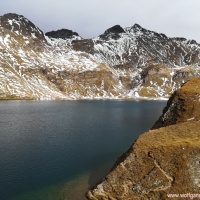