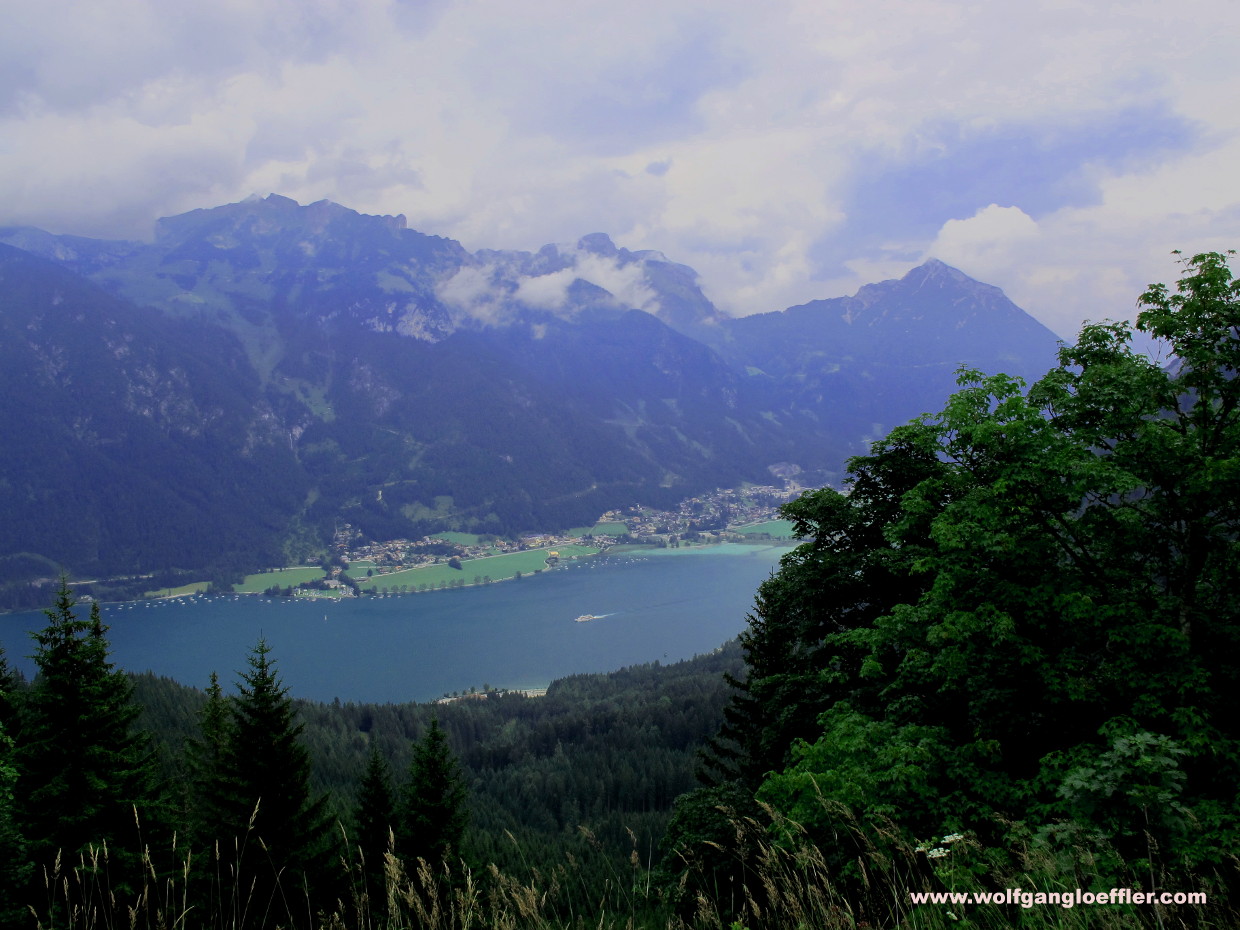 As you might know, August 15 is Assumption Day and therefore a public holiday in roman-catholic Bavaria. Really in all of Bavaria? No…. There are a few heretical towns in Franconia that have lost their good faith and are mostly protestant and therefore hve to work on this day. I was looking forward to that day this year, since it was my first day of vacation. And on top the forecast had for once announced beautiful, sunny weather which hasn’t been the case  this summer too often.

But already the night before I didn’t sleep too well and when I woke up in the morning I felt like being pushed through a rotary iron. And it did get worse and worse during the day. At one point I thought that Mother Mary apparently had a reservation for me in her lift and wanted to take to the top floor with her. Well, I thought it is too early and decided to let go the next lifts and give my space to others. So I did survive the day and funny enough I already felt much better the day after. Has this attack just been a cause of the dangerous Man Flu, that is only felt by men?

Anyway this huge amount of blasphemy cries for penitence. To go on a pilgrimage to Altötting wasn’t an option, since I did feel a bit too weak to walk the 62 miles from Munich as you are supposed to do in order to get absolution. Fortunately there are alternatives. Namely in Pertisau on the Achensee, right across the border in Austria. So I took the car and two hours later by passing the Tegernsee I arrived at the bottom of the Karwendel cabins.

I start my hike by walking back down to the lake shore direction Maurach. This is where I come across this fascinating wooden construction, which actually is a panoramic platform that offers great views of the lake and the mountains surrounding it. I did pass by this lake quit often in the past and always admired the awesome scenery, but never stopped to explore it. It’s really amazing what you can discover just in front of your hometown, if you take the time to find those hidden treasures.

Aussichtsplattform am Achensee in Tirol

Aussichtsplattform am Achensee in Pertisau

Some 15 minutes later I finally do reach my „penitence walk“. A parking lot between the towns of Maurach and Pertisau marks the start of the „Notburgasteig“ or „Reflection-Serve-Courage-Walk“ which is the translation of the official name.

Hotel in Pertisau am Achensee

Saint Notburga lived in the late 13th century on the lake an did work as a maidservant. She was known as a woman that would share whatever she has with the poor. But she’s better known for the following story: She had this agreement with her employer that she was allowed to quit work in the evening when the church bells rang to go and pray. But on one of those days while they where harvesting this huge thunderstorm was moving in and the farmer ordered everybody to stay until the harvest will be secured on the farm. Notburga didn’t agree though and threw her reaping hook into the sky where it stuck on a ray of sunlight. The farmer was so impressed by this, that he did let her go. I assume this was the birth of the unions……….. 🙂 Surely enough Notburga is the patron saint of the maidservants and farmers.

So this is the entry to this walk and I am wondering what humbleness has to do with a hike in the mountains. And no, it’s not because this is a extremely steep path that needs a lot of shape to walk it. What it is asking you, is to walk it with open eyes and stop at different stations for a moment and think.

One of the first stops asks you to serve each other like the steps and the handrail of a staircase. In order to get into the mood for this path you will have to pass this low gate.  The path now rises gently and you will pass different stops with slogans that shall make you think. Some of them are 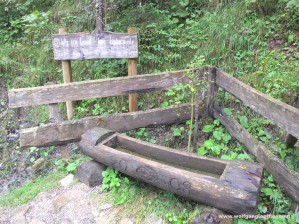 from the bible. I think that’s a rather cool idea in our fast moving time. Rest for a moment! Even if your are not that much into religion, this might be a reason to walk this path.

And without even noticing it you did ascend far enough that you will get fascinating glimpses of the valley and the lake between the trees. Unfortunately the weather wasn’t that great, but it didn’t rain which already means a lot during this summer. It’s a bit sad, since my pictures won’t be as I would like them to have. Well, I guess I just have to com back on a sunny day.

And all a sudden you find yourself in front of this sculpture: „In God’s Hands“. At least a great motive for some very special pictures. And this fabulous view across the lake……….. 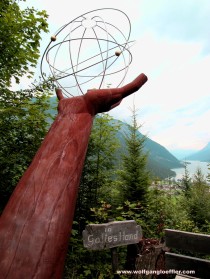 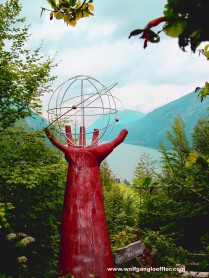 I am not so sure what to think about the sculpture on the next stop. It inspires me to some more blasphemic thoughts. 🙂

Christ sculpture on the Notburgasteig

These lumps of rock that form a grotto mark the end of this trail. You can walk a few minutes to get to a cottage called Rodlhütte (sleigh cottage) and have a bite to eat and a drink, or you walk back to the last crossing and ascent via the „Tunnelweg“ to the summit.

The end of the Notburgasteig

The path that follows is easy to walk, but is maybe not meant for people with acrophobia. It is broad enough for two to walk next to each other and is secured, but the descent on one side is very steep. On two occasions you will pass through a tunnel that have been carved out by Italian prisoners of war during WW1. The view of the „Karwendel“ valleys is breathtaking. I am sure there are a few more hikes that wait to be explored by me. Somewhere in the clouds I can hear a bird cry. Could this be an eagle? Apparently there are a few living in this region.

After a while I reach a high valley with green alpine pastures. The hike follows for a short while a gravel road, before turning uphill in a meadow, soon reaching a saddle between two mountains. At the end of this saddle once again a real awesome view across the lake and the mountains on the other side of it. And when you then turn around you will face the „Baerenbadalm“. It is rather cool up here and I am happy that I did bring a jacket. Despite a light drizzle I chose a table outside to take a seat and drink my non-alcoholic beer. The menu doesn’t give you a big choice, they mainly serve food that is produced right here on the mountain. I opt for the cheese/spinach dumplings that are just perfect.

Originally I had planned to continue uphill to the summit of the Bärenkopf, but I have to realize that I am still not well and not in my best shape. On top the summit i hidden in the clouds and they did forecast some heavy thunderstorms later in the afternoon. So I walk over to another summit called „Zwölferkopf“ to the top station of the Karwendel cabin. But descending the mountain in a cabin is against my personal rules and my pride wouldn’t let me break them. On my down I come across this nature trail that does tell you interesting facts about the animals that do live in this region. 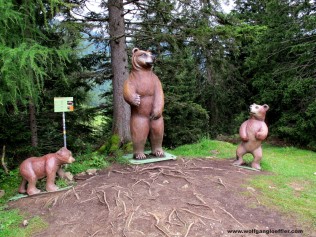 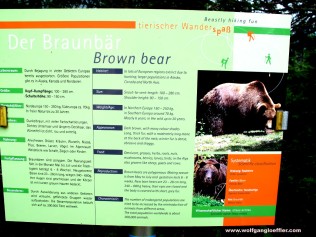 The path brings me back to the tunnels and soon I am standing in front of the Rodlhütte again. Since I do have craving for something sweet, I decide to stop here.

On my way up the people her were very helpful and friendly, plus the cottage seemed to be very cozy and clean. Unfortunately the cottage cheese strudel they did serve was about the worst I ever had.  How can you make a strudel with puff pastry? And then heat it up in the microwave? I just hope that the rest of the choices on the menu are of better quality.

From here I follow the shortest path back to my car. In the winter time this a sleighing track. Looks like a real fun track. Maybe I should come back in the winter.

I am glad that I did drag myself out of the house and go on a hike. That’s what I think on may slow way back home. 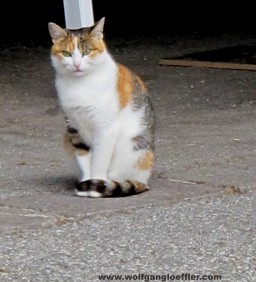 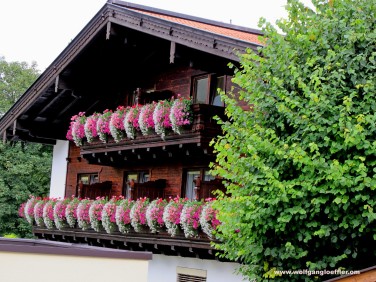 Traditional House and flowers in Pertisau